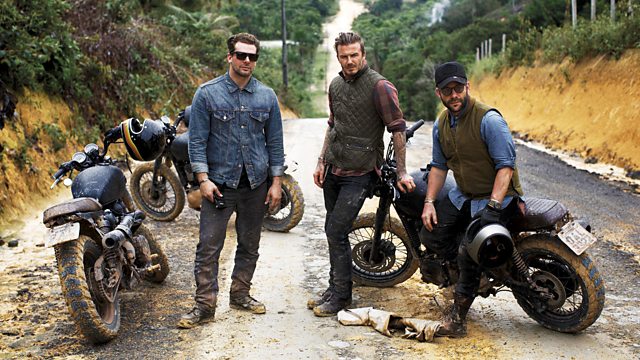 This 2014 production started with beach foot-volley in Rio, ending up with the remote Yanonami tribe, with David desperately trying to explain the beautiful game.      taking three of his closest friends to join him on this once in a lifetime experience the lads travel deep into the Amazon, umping on their bikes for a speedy getaway, the friends escape to a favela slum called Vidigal. Later, down on Sao Conrado beach, the locals can’t believe their luck when David joins them for a game of foot volleyball.

The Beckham party then fly out to Manaus, the tropical gateway to the Amazon, and subsequently to a remote territory in the middle of the jungle – where even Becks is largely unknown. And really into the unknown. From then on they sleep in hammocks and ride much of the way, getting dirtier and muddier.

David said the team took quite a difficult route through the rainforest, admitting there were a few ‘dodgy roads along the way’. But hey, that’s normal when you cruise into the unknown territory that they ventured into.
Beckham jokingly admitted that ‘Seeing Dave really, really struggle – that was a most pleasurable part of the trip!’

The trip lots of us may dream of.